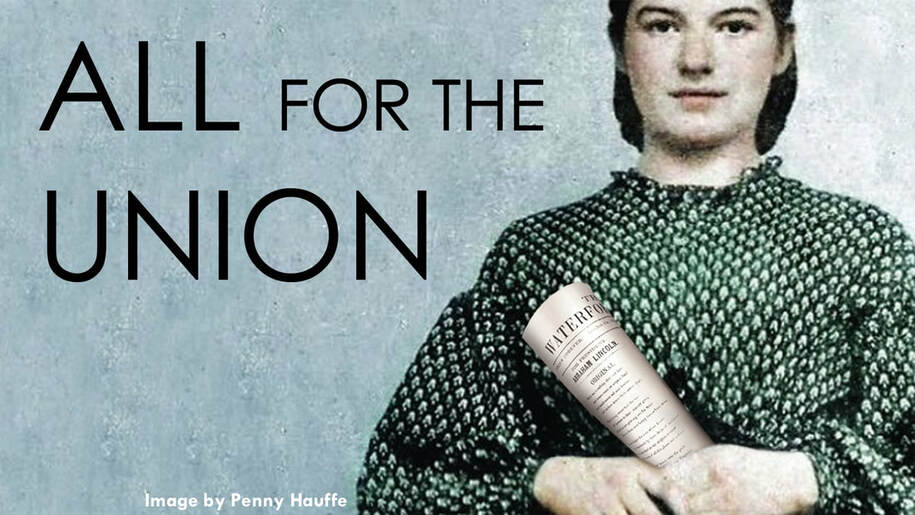 ALL FOR THE UNION
PRODUCTION NOTES & RESOURCES
Meredith Bean McMath

PARTNERSHIPS
As a prize-winning playwright an award-winning historian, McMath is pleased to offer All for the Union at one-third the normal royalty fee to historic preservation organizations and theatres working with organizations dedicated to the knowledge of previously unknown heroes who remained loyal. The play focuses on three heroes - Lida and Lizzie Dutton and Sarah Steer - who were the first female journalists in Virginia and published an underground newspaper for Union Soldiers during the last half of the war.

COSTUMES
Quaker women of Waterford, Virginia wore garments identical to those found on any street in America at the time, including hoops (referred to in The Waterford News). Waterford Quakers were of the Hicksite persuasion, a liberal faction of Orthodox Quakerism, and the only restriction they placed on themselves was to avoid ostentatious display (no vibrant colors or decorative dress elements), but they wore broaches and earrings. And they wore shawls and bonnets when out of doors (gloves, too, but these might have been worn out due to the war, so they aren’t really necessary).
Emma Dutton would wear a head covering indoors - a simple cap or something from Mrs. Dutton’s Quaker youth (a plain cap made of see-through fine linen).
Gentlemen Quakers had no restrictions on facial hair. The Quaker hat of the time was a circular, broad-brimmed, low crowned affair - often of straw. Hicksite Quakers wore black frock coats and vests (Orthodox Quakers considered black a worldly color).
It’s best to borrow soldiers’ uniforms and equipment from Civil War re-enactors (or dirty up reproduction costumes). Rental costumes may err on the side of cleanliness.

REHEARSING IN COSTUME
It is extremely helpful to have the women wear hoops and/or corsets during rehearsals and soldiers to practice with hats, revolver belts and swords, etc. – depending on their character.
Women need to learn how to sit in the hoops and work on having their movements become natural and graceful. To sit in a hoop, a lady brings one hand to the middle of the back of her skirt, lets her fingertips find the nearest available hoop, raises the hoop three or four inches and sits. The hoops will fold neatly around here. To go up a set of stairs, a lady holds her skirt before her with only one hand. On coming down, she does not hold the skirt at all (the weight of the skirt will force the hoop skirt away from the foot).
Ideally, soldiers will wear their sword belts/revolvers and haversacks and/or carry their rifles during rehearsals to get used to the heft. Lieutenant Hutchinson in particular needs to smoothly remove and return his revolver and sword belt with ease — as though he’s done this every day of his life for the last three years.
History and Images of Waterford, Virginia: https://www.waterfordvillage.org/

TRUTH vs FICTION in ALL FOR THE UNION

To Talk is Treason, Bronwen and John Souders and John Divine, The Waterford Foundation, Waterford, VA (1997)

The Independent Loudoun Virginia Rangers: The Roster of Virginia’s Only Union Cavalry Unit, by Lee Stone

History of the Independent Loudoun Rangers: US Volunteer Cavalry (Scouts) 1862-65, by Briscoe Goodhart, Co. A; Press of McGill and Wallace, 1896

The Civil War in Loudoun County, VA: A History of Hard Times, by Stevan F. Meserve; The History Press, 2008

A Woman’s Civil War: A Diary with Reminiscences of the War from March 1862, by Cornelia Peake McDonald, ed. Minrose C. Gwin; The University of Wisconsin Press, 1992
Crossing The Line: Civilian Trade and Travel Between Loudoun County, Virginia, and Maryland During the Civil War by Taylor M. Chamberlin & James D. Peshek; Waterford Foundation, 2002.

The County of Loudoun, by Nan Donnelly-Shay and Griffin Shay, The Donning Co. (1988)

From Loudoun to Glory: The Role of African-Americans from Loudoun County in the Civil War, Kevin Dulany Grigsby, @ 2012

Oh! Let My People Go: The Song of the Contrabands” - Published 1862. Notes from: https://en.wikipedia.org/wiki/Go_Down_Moses - “Sarah Bradford's authorized biography of Harriet Tubman, Scenes in the Life of Harriet Tubman (1869) quotes Tubman as saying she used "Go Down Moses" as one of two code songs fugitive slaves used to communicate when fleeing Maryland. Tubman began her underground railroad work in 1850 and continued until the beginning of the Civil War…”