I was rubbing the frosting of the lemon cake against the roof of my mouth with my tongue and listening to my table mate lament the ordinance forcing him to give up the alpacas about to be born into the small herd he keeps on three and a half acres when I heard Meredith McMath call out from the edge of the pavilion. “You may have noticed that Cupid just shot one of her arrows,” she called. “The show has begun.” The show was A Midsummer Night’s Dream, Shakespeare’s fairy tale about fairies, lovers, and a meddling centaur, and I had in fact noticed five or six girls dressed in white gauze, fluttering in the swale below the pavilion. One of them was Emily Hyland, whose round eyes I remembered from All in the Timing, the last production Run Rabbit Run Dinner Theater staged at Grandale Farm. She’s good, I recalled. Then my mind drifted back to the alpacas.

“The babies are called crias,” Steve said. “They gestate for eleven months!” 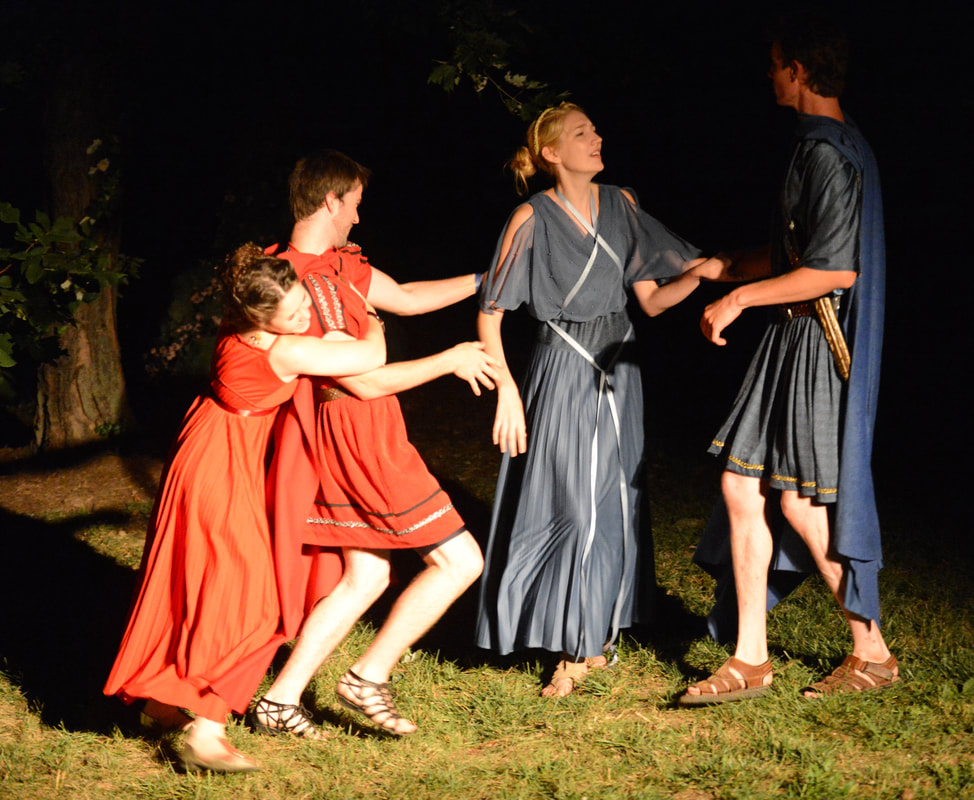 Hermia (Eavan Kennedy), Lysander, Helena (Taryn Bromser-Kloeden), and Demetrius struggle to figure our who loves whom (Photo by Jim Poston).

We were seventy or eighty people sitting under a white tent in a space that used to be a parking lot, above a grove where several trees, a raised gazebo, and a spring house stood. We had eaten sausages and chicken breasts and green beans and potato salad, and brownies with orange slices on them, and that lemon cake, and there was rich red wine and the kind of conversation with strangers that you like all the better for suspecting at first that you wouldn’t like it.

Outside our haven it was dusk. All the noises of a damp Virginia summer night were rising from the woods and fields and ponds, and mist had begun to float across the meadow, at which one might idly glance if conversation waned. But it didn’t, even after the director of the play suggested that we turn our eyes and ears to the actors. Which was hard to do because they were in that swale and we were in the haven of the tent, which caught our voices and the clinking of our silverware and the crunching of the gravel underfoot in a vortex that reduced all the noises beyond the pavilion to indistinct tones. And Shakespeare’s language can be hard to follow even when you hear it clearly.

“Am I crazy to do it this way?” McMath had asked me earlier, and I had assured her that she wasn’t crazy, that A Midsummer Night’s Dream was meant to be staged outdoors on a midsummer night. It is, after all, a play about semi-human creatures who live in the woods and prey on people who stray from safer places into haunted forests, people like all of us sitting under the tent and gazing out into the darkness, which scares us a little, despite our rationality. Crazy, no, but maybe ill-advised, because in fact the play was meant for the stage at the Blackfriars Playhouse, where most of Shakespeare’s work appeared, and where nothing much competed with his language. I wondered whether this was the first time McMath had had to tell an audience that it was time to pay attention to the play. 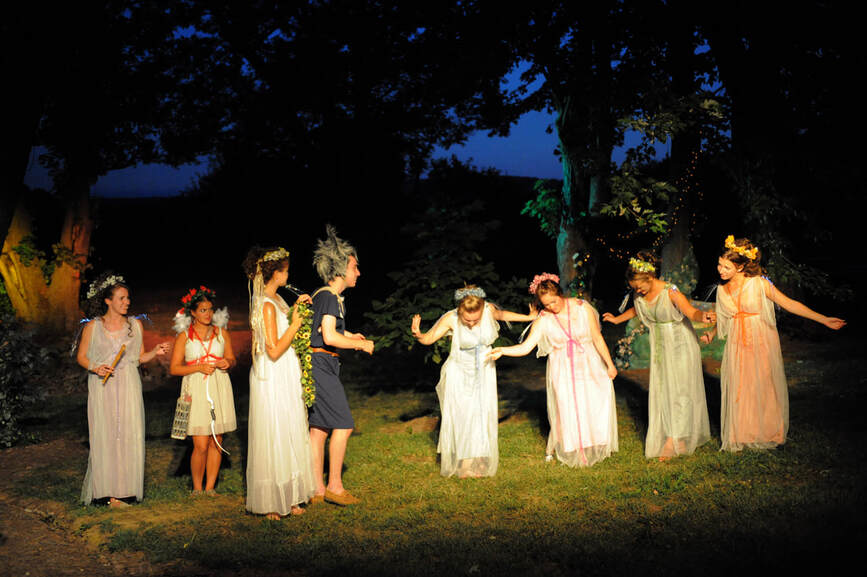 The reason not to stage a play outdoors is that you lose control. You can’t control the weather, which had
alternately roasted and flooded rehearsals of this production. Severe thunderstorms had forced McMath to cancel the pay-as-you-will performance originally scheduled as opening night. You can’t control insects, which bite and sting and make a lot of noise in rural Virginia, and they attract bats, which are hard to ignore. You can’t control passing airplanes, trucks on Harpers Ferry Road, dogs and children in the distance, people getting up from their table to crunch across the gravel to the bathroom or the coffee urn–in the middle of Titania’s speech!

The logistical problems are equally formidable. If action occurs in more than one place, where should the
audience sit? How will they know where to look? Does everyone need to hear every line and see every gesture?

How can the actors’ voices compete with the night’s voice? And how can 80 people see what’s happening in a space below their seating level, rather than above it? If actors exit the stage space in four or five different directions, how do they get to the place where they make their next entrance? If there is no backstage space, where do you accomplish all the operations that normally occur backstage? All of those questions together form a larger question, which is why?

Because the pay-off potential is huge.

When Garrett Milich, who was setting lights and taping power cords a while ago, trots out of the darkness
shirtless, in furry trousers that poof his butt out, with horns on his head and something like hooves on his feet and speaks to Oberon in couplets, we laugh and marvel, whereas if he had trotted onto a stage in a building, we would have merely laughed. Something in us suspected there were creatures like Puck in the forest, part goat, part man, part magic. “I knew it!” we say when he trots in and out of the shadows. We wouldn’t say that if he merely trotted offstage. 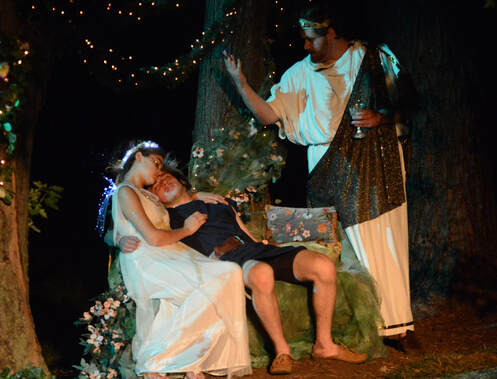 Puck in the crook of a tree, eating grapes and eavesdropping on Helena and Demetrius, with the darkness of the Blue Ridge and the roiling clouds behind him–real clouds that broke open earlier and might again.

“Use me as your spaniel,” Helena implores Demetrius. “Spurn me, strike me, neglect me, lose me; only give me leave, unworthy as I am, to follow you,” she begs, and just then a fox lopes away up the hill behind Puck.

Titania has rope lights woven through her hair, and her retinue of fairies floats out of the darkness into the swale on lighted wings. French horns in the distance tell us Theseus and Hippolyta are approaching from behind the spring house. When Lysander and Hermia lie down to sleep in the woods, Puck covers them with moss that he pulls off a tree. Bottom exits towards the barn, braying like a donkey, and we hear him braying in the distance for a minute after he’s been put into his stable. Spotlights hidden in the trees allow us to see what’s happening in one small part of the woods, and every time someone rushes out of the little lighted space into the darkness, we wonder what’s happening in the realm beyond, where the fox disappeared a minute ago to avoid being used as a spaniel.

None of that could happen in a space that you control, and watching it happen here, in open country on an
unpredictable midsummer night is a thrill that’s worth the risk of giving up control.

There are fine performances – Milich as Puck, Hyland as Titania, Eavan Kennedy as Hermia. But the real star is the place itself, the open-air midsummer night and the forest, which really isn’t a fairy-laced, enchanted realm, really isn’t a place where semi-human creatures wait among the trees for vulnerable mortals to bewitch, much as a part of us thinks that it is, the unreasonable part of our rational suburban selves.

But the next morning, when you come over Snickers Gap and see the hills and ridges dark above the gray mist in the valley – Beauty! Wonder! – you remember that forces you don’t understand control the world, and do things to it while you sleep, to please themselves apparently, with no regard for reason whatsoever.

And you thank unreasonable Meredith McMath.
Hi there!