"You bring women's history and stories out of the shadows."
- Lee Lawrence 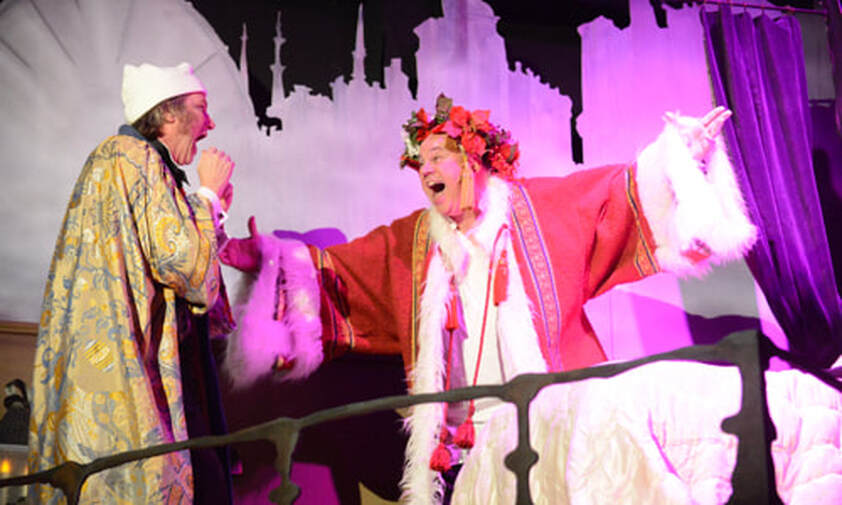 2018 Production: Phil Erickson as Ebeneezer Scrooge and Shawn Malone as The Ghost of Christmas Present

"... McMath, who adapted the classic Dickens novel for the stage, and Diane El-Shafey, who wrote the production’s original score, have surrounded Scrooge with all the teeming life that fills London, or Loudoun, or any place with music — not just jingles that stick to the bottom of your shoe, but beautiful music that matters and makes sense... 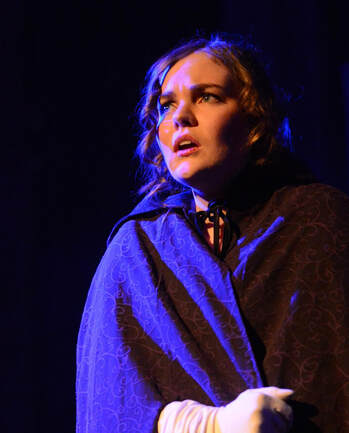 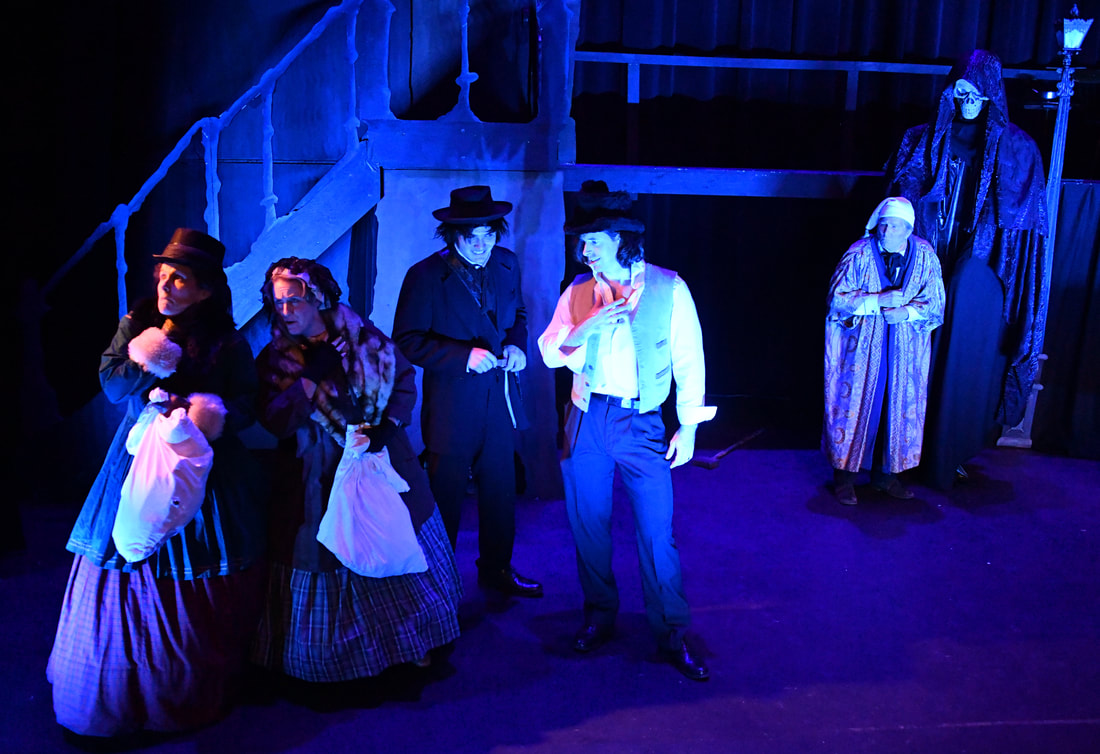 2018 Production, L to R: Penny Hauffe as the Laundress, Sue Derrow as the Charwoman, Clay Noyes as the Undertaker's Man, Chris Saunders as the Beedler, Phil Erickson as Scrooge and Beckett Denson as the Ghost of Christmas Future 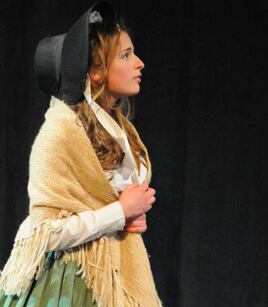 Annamaria Kendrat as Josephine ("Jo") March
"All the wit and humor, joys and struggles of the marvelous March sisters - Jo, Meg, Beth and Amy - brought to life in a fast-paced, musical adaptation of the Louisa May Alcott classic!"
- Holiday Charm, DC Metro Theater Arts

"In her adaptation, McMath captures the two most important dramatic elements in Alcott's tale of the struggling Civil War-era March family: the power of familial love and the dynamism of the March sisters' intelligence and humor.
"With tight, well-timed scenes, McMath's retelling of the young women's struggle with the complexities of love and war keeps the audience alert and involved, letting Alcott's wit permeate the production."
- McMath Brings Alcott Story to Life", Ann Keisman, Loudoun Times Mirror, 2004 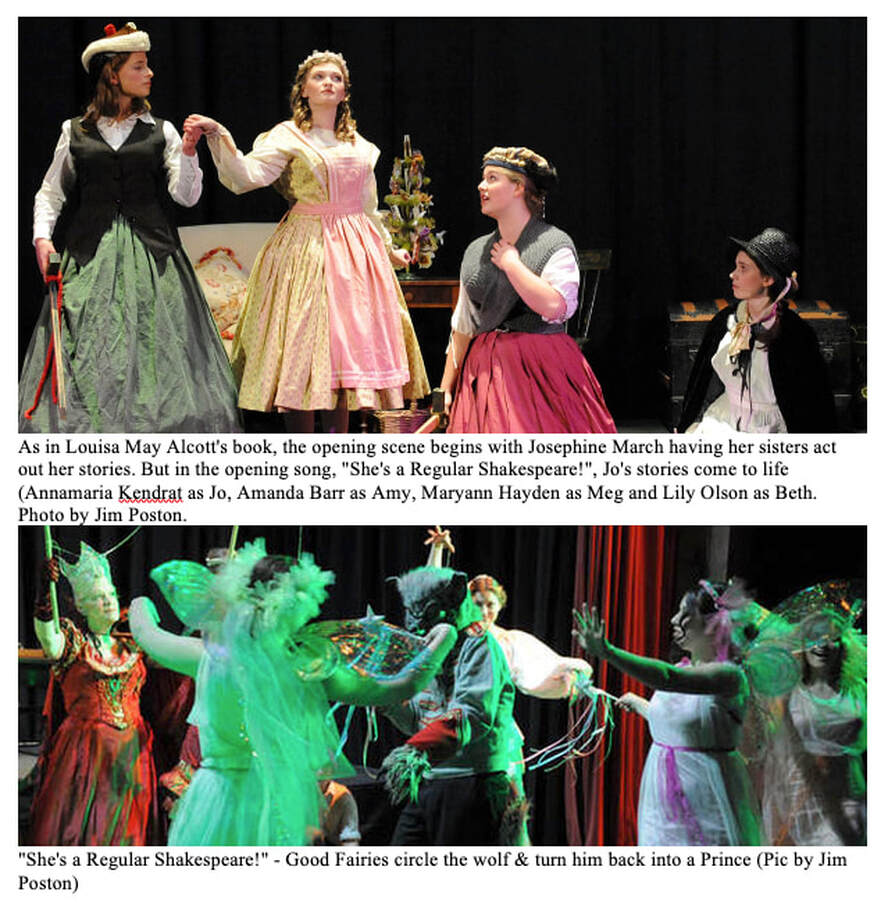 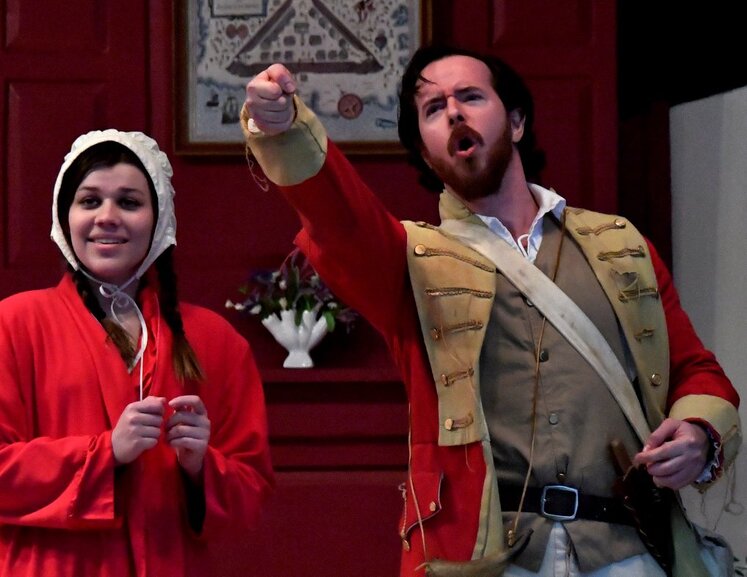 "McMath’s adaptation of George Bernard Shaw’s play “Arms and the Man” is full of exchanges that make a guy nostalgic for a language alive with wit and humor, with deliberation and suggestion, a language rich enough to express the complicated truth about each of us and thereby make it possible for us to know ourselves.”
- Mark Dewey, The Blue Ridge Leader, 2006 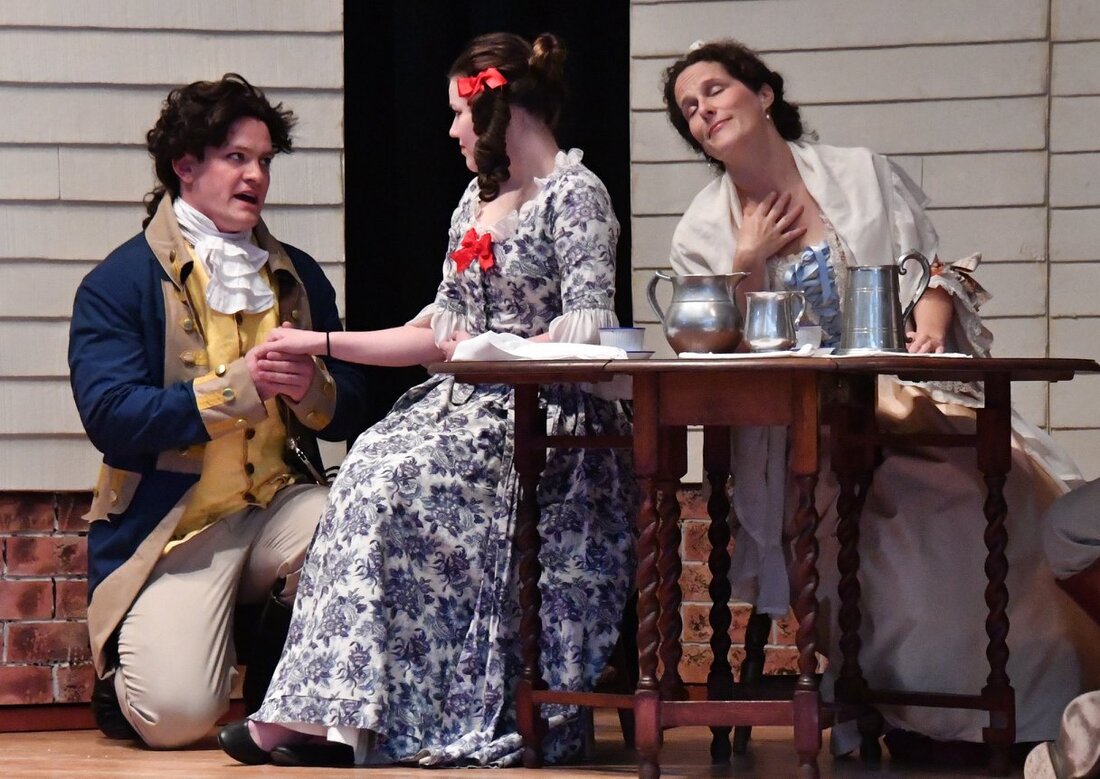 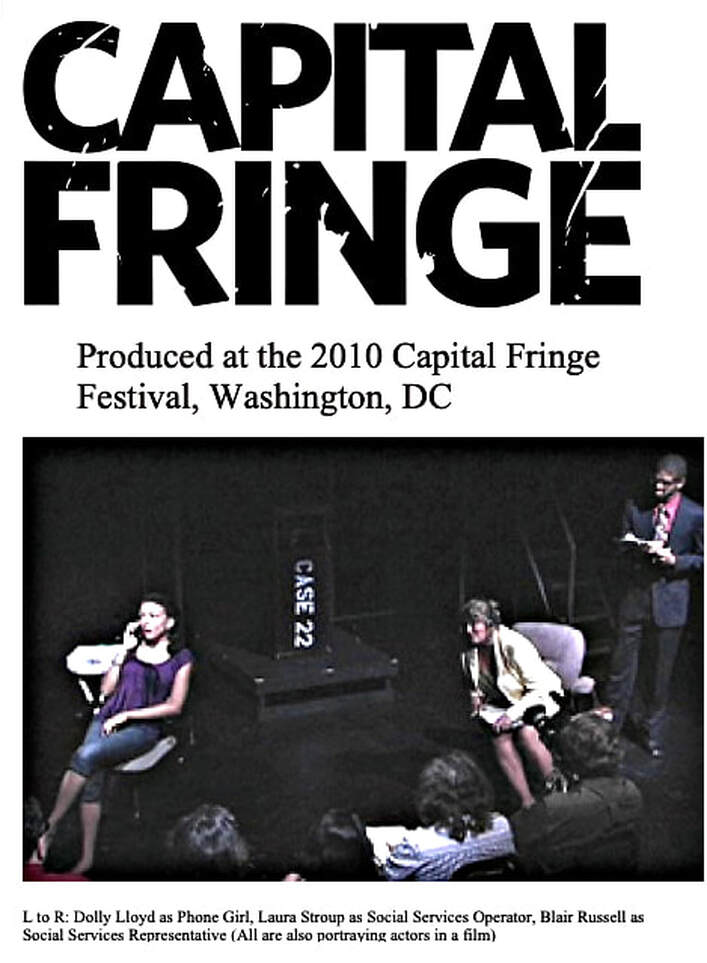 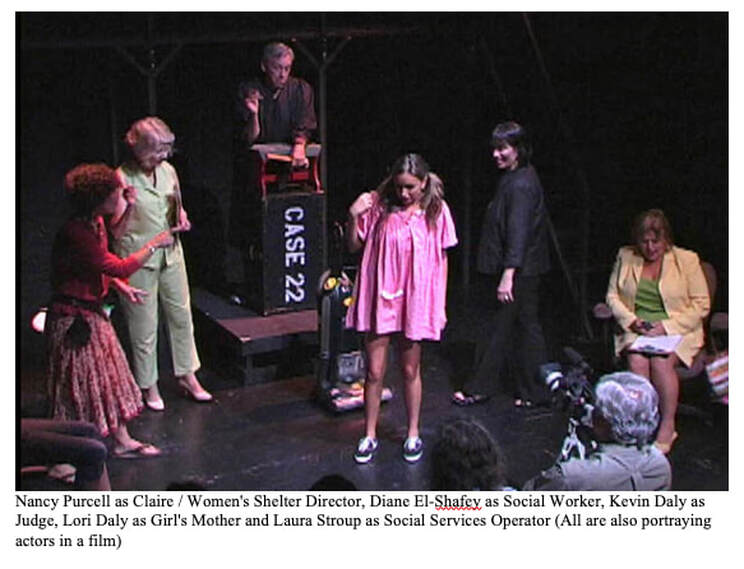 "In a pivotal scene in the second half of Case 22, a judge tasked with assessing a case of alleged child abuse engages in careful deliberation, reaches a verdict, assembles the courtroom, raises his gavel and – sorry, scratch that....."

"Actually, after exhibiting zero signs of deliberative exertion, the judge raises a hammer and proceeds to wield it with the veritable absence of subtlety that its actual function implies. It’s a wickedly clever flourish that speaks to the pitch-black comedic sensibility of Case 22, a play that seamlessly operates on multiple levels of meaning and structure even as its central theme, the decidedly unfunny subject of child abuse, remains undiminished by the attendant shenanigans. 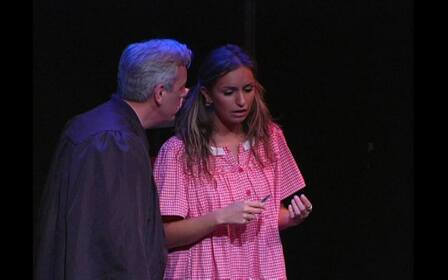 "Are they performing, or is it the real thing? CASE 22 delights in the disarray of its dual plot lines, which serve to emphasize the concurrence of the actors' predicament with the travails of their script's protagonist...

"In this context CASE 22, which packs a wallop of an ending, adroitly portrays the grim theatricality of a government agency that, despite its grave responsibilities, persists in the apparent absence of a director."

MUCH ADO ABOUT NOTHING
McMath - Director / Producer / Costumes / Media

"A noted historian and author, McMath launched Run Rabbit Run in 1999 and has collaborated with some of Loudoun’s best-known names in community theater."
- Jan Merker, Loudoun Times Mirror, August 2018 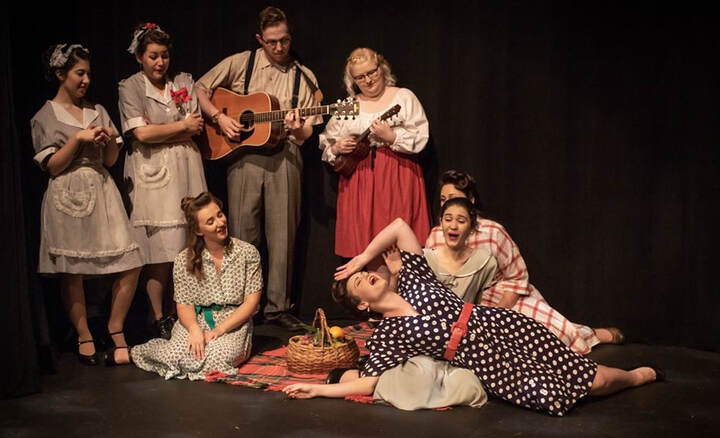 L to R: Katy Shinas, Rosemary Thoburn, Vanessa Borg, Julian Baldwin, Rachel Louis as the swooning Beatrice, Bobbie Regan & Victoria Sova as Hero (Photo by Craig Thoburn).
“Rachel Louis (who plays Beatrice) said, 'One of the things Meredith has really encouraged is to play with the audience and make them another character in the show'." - Jan Merker, Loudoun Times Mirror, August 2018 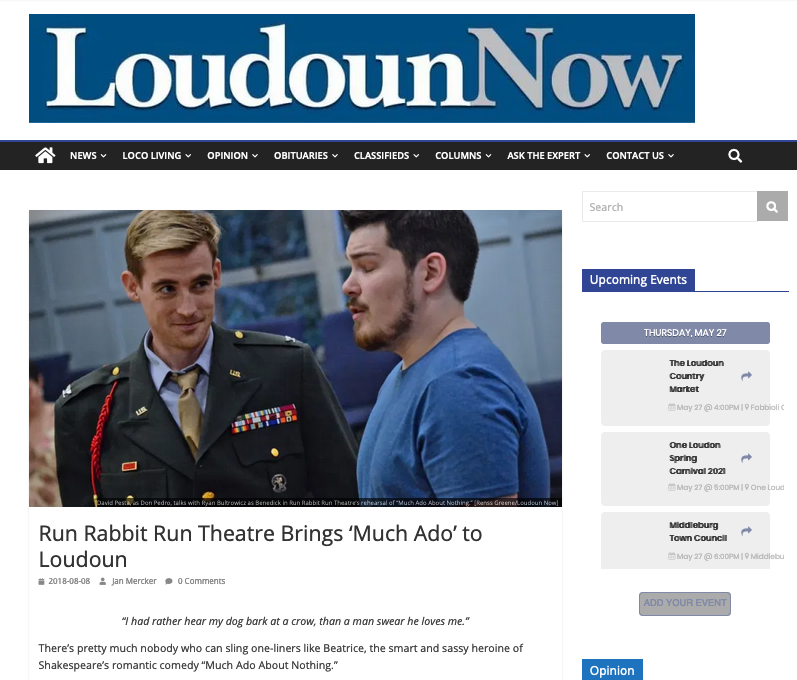 THE TAMING OF THE SHREW

"A Whirlwind comes to Purcellville", Mark Dewey, DC Metro Theater Arts, May 2013
"...four actors run through 33 scenes playing 139 roles in about 100 minutes. Actually, the actor Phil Erickson plays only the role of Richard Hannay, and Penny Hauffe plays only the three women who become pseudo-romantically involved with him, so that leaves something like 135 roles for Kevin Daly and Tom Johnson, who are identified in the program only as Clown one and Clown two.

"Those two men are sometimes called upon to switch identities — and accents, and genders — from one line to the next by switching hats or walking in a circle around another character or putting their heads through an imaginary window, all of which happens repeatedly, right before our eyes, at speeds that smack of the aerobic exercises hired trainers make us do."

"If action occurs in more than one place, where should the audience sit? How will they know where to look? Does everyone need to hear every line and see every gesture?

How can the actors’ voices compete with the night’s voice? And how can 80 people see what’s happening in a space below their seating level, rather than above it?...

All of those questions together form a larger question, which is why?
Because the pay-off potential is huge."

"... And you thank unreasonable Meredith McMath." 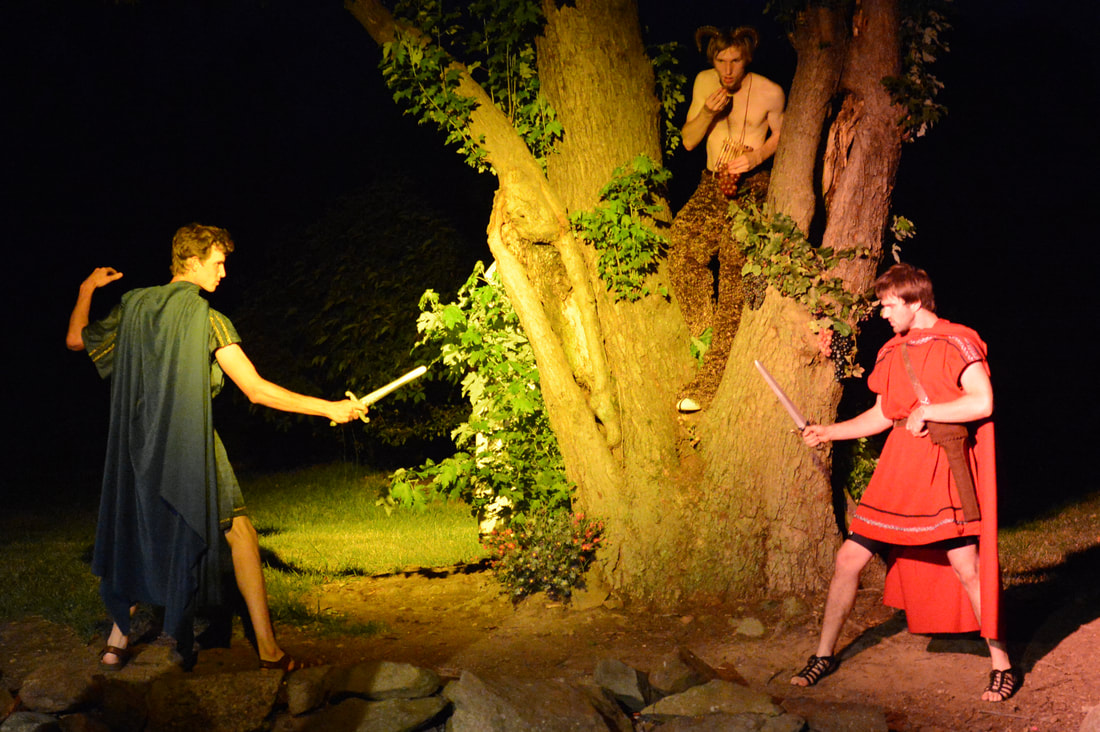 Puck (Garrett Milich) eats grapes as he merrily watches Demetrius (Lee Bean) and Lysander (Ethan Dean) fight over the jealousies he has conjured within them (Photo by Jim Poston).

“[The Merry Widow] has it all—scandal, intrigue and even a gaggle of Can-Can dancers—Les Grisettes of the famed nightclub Maxim’s. Passionate and playful music, striking costumes and more vocal talent than you can shake a fishnet-clad leg at make LLO’s The Merry Widow an event not to be missed." - Samantha Bartram, Leesburg Today, 4.13.12 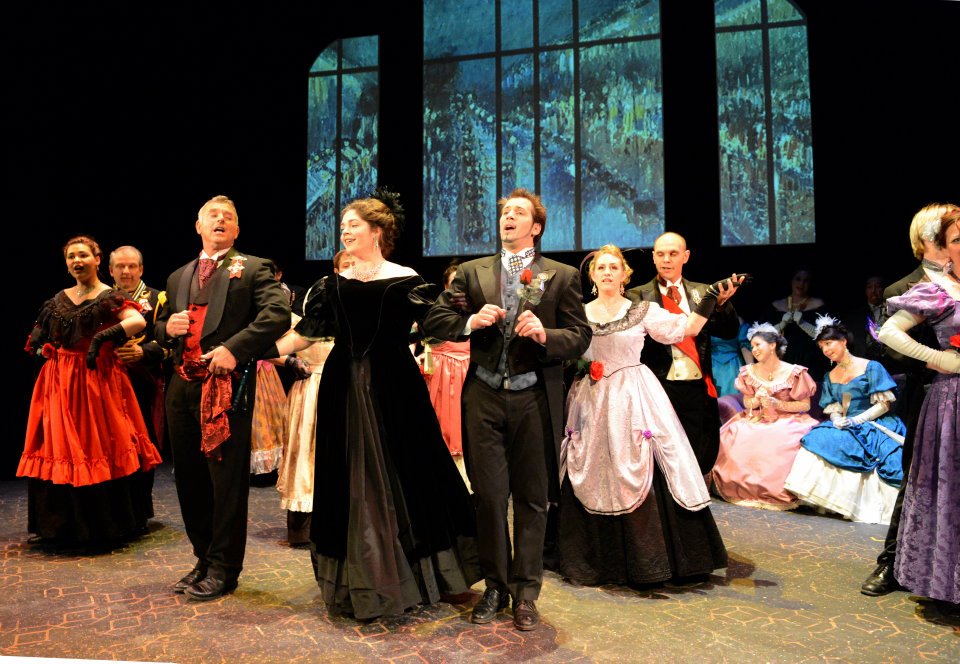 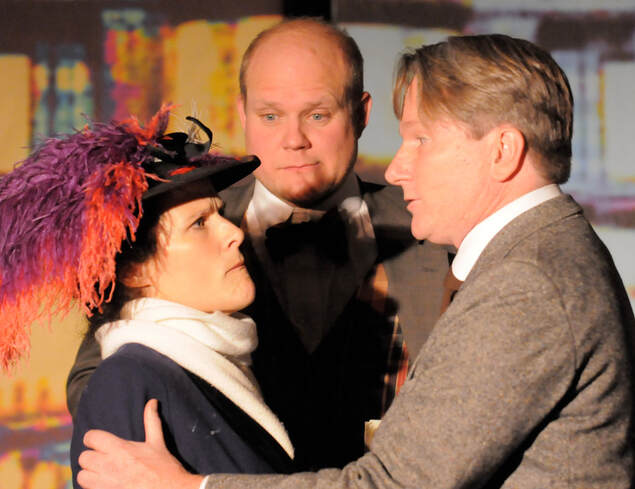 Penny Hauffe as Eliza, Craig Synder as Colonel Pickering and Phil Erickson as Professor Higgins (Photo by Jim Poston)
HONORS
DC METRO THEATRE ARTS "BEST OF.." LIST
PRESS REVIEW
"Penny Hauffe, Craig Snyder, and Phil Erickson shine as Eliza Doolittle, Colonel Pickering, and Henry Higgins" "... Nine people who are so good at pretending to be other people that you wonder whose voices they hear when they talk to themselves." - Mark Dewey, Shenandoah Press

PATRON REVIEW
"Pygmalion was full 'of chocolates... and taxis, and gold, and diamonds!... The cast presented a feast of Shavian wit and a social statement that is applicable nearly a century after its premier. Bloody good show, Run, Rabbit, Run!" - Matthew Gallelli 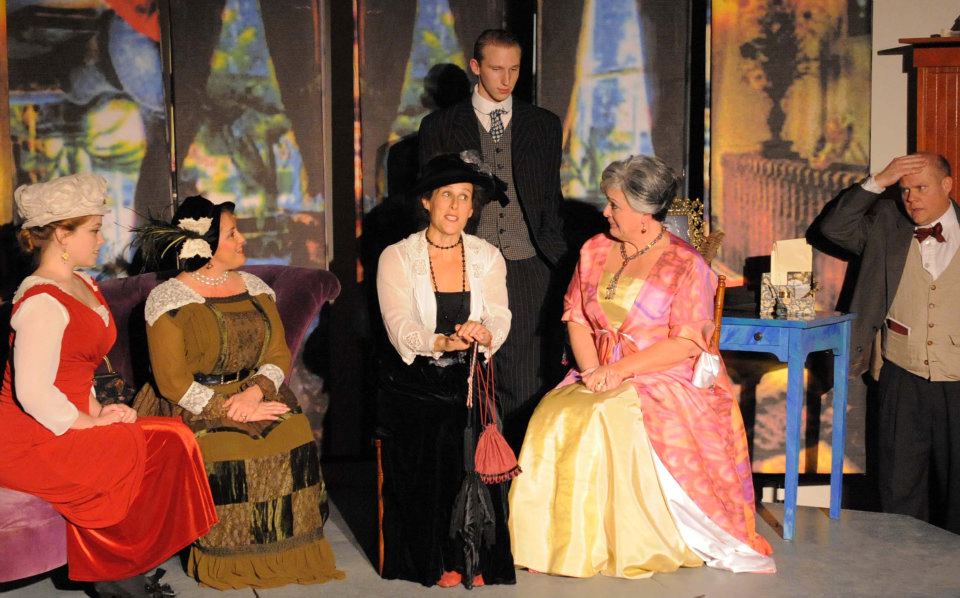 "From casting to staging to wardrobe, the show exudes meticulous attention to detail that results in an evening of marvelous entertainment.

"This production showcases the crew's extensive work in the historical genre, particularly the direction of Meredith Bean McMath."