ALL FOR THE UNION
Produced at the 2019 Capital Fringe Festival, followed by a two-week sold out August run at Historic Aldie Mill, in Aldie, Virginia.

Valerie Konur as Mariah in the 2019 production of ALL FOR THE UNION (Photo by Craig Thoburn)
"You bring women's history and stories out of the shadows." - Lee Lawrence

McMath's original play is based on the true story of Lida, Lizzie and Sarah - three young pro-Union women living in Confederate Loudoun County, Virginia who chose to write a newspaper to boost the morale of Union soldiers. As a result, they became the first Female journalists of Virginia. Their Waterford News covered the reality of their daily lives - from skirmishes, battles and Confederate foragers to Union burning raids and personal loss - all with unshaken hope and ironclad humor. The play explores why they made those choices and leaves the audience to wonder whether they'd do the same.

L to R: Ernie Carnevale as Major Littlebone, Penny Hauffe as Catherine Littlebone, Steve Beggs as Captain Hay, Brittany Barrett as Elizabeth Littlebone, Millie Shipe as Betty, and Christopher Saunders as Henry James Hamilton Clodfelter in the show's 2006 premiere
"McMath’s adaptation of George Bernard Shaw’s play “Arms and the Man” is full of exchanges that make a guy nostalgic for a language alive with wit and humor, with deliberation and suggestion, a language rich enough to express the complicated truth about each of us and thereby make it possible for us to know ourselves.”
- Mark Dewey, The Blue Ridge Leader, 2006

Brie Reid as Elizabeth Littlebone and Christopher Saunders as Captain Gabriel Hay in the 2018 production
This Colonial American adaptation of George Bernard Shaw's Arms and the Man begins just after the Battle of Yorktown. As Americans realize they've won the war, they're celebrating in the streets; young Elizabeth Littlebone has just heard the news that her love led the final charge, and with great pride and dreams of a happy future in this brand new America, she blows out the candle in the window and tucks into bed. In the street below, one British Mercenary Soldier is running through the streets to save his life when he spies the open window above. As he climbs the side of the home, Capt. Hay thinks is certain he's made a brave escape, but he's never met a brave, new American lass.

McMath adapted Shaw's play to make the work more accessible to modern audiences. Shaw's original was set in the generally unknown 19th c. Serbo-Croatian conflict but full of a biting, contemporary humor and a grand love story. The play premiered at Grandale Farm Restaurant to critical acclaim in 2006. Further information on the play's adaptation can be found here.

With Kevin Daly as "Judge" and Morgan El-Shafey as "Girl"
"Are they performing or is it the real thing? Case 22 delights in the disarray of its dual plot lines, which serve to emphasize the concurrence of the actors’ predicament with the travails of their script’s protagonist... "In this context, Case 22, which packs a wallop of an ending, adroitly portrays the grim theatricality of a government agency that, despite its grave responsibilities, persists in the apparent absence of a director."
- Tzvi Kahn for DC THEATRE SCENE
This original contemporary drama, written and directed by McMath, premiered at the 2010 Capital Fringe Festival in Washington, D.C. to critical acclaim. The play begins as a group of actors rehearse a play about child abuse and Social Services intervention. But the actors begin to do more than act, and the child begins to do more than the others to get the part... in fact, she may give it her all. 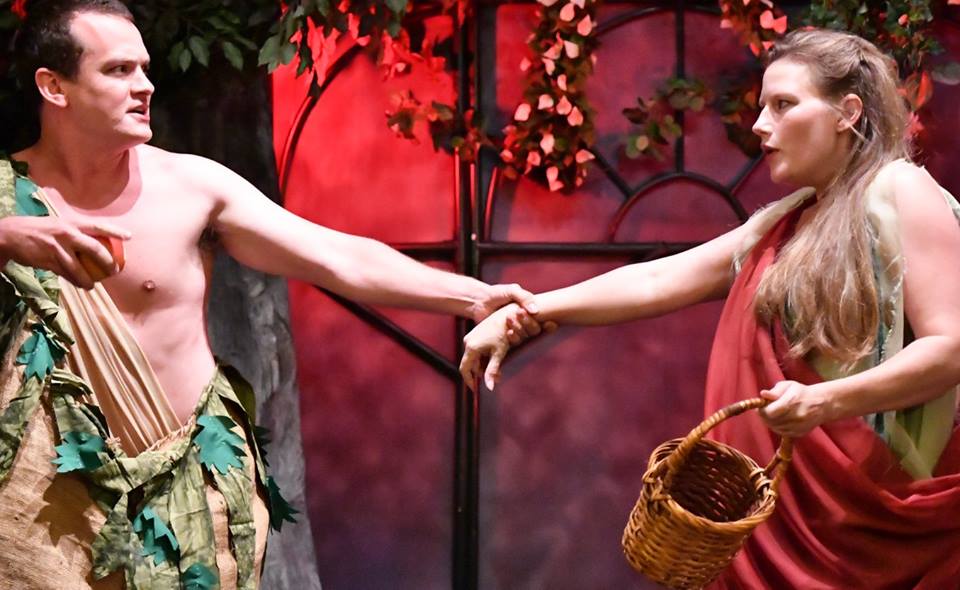 Ben Huntington and Carolyn Cutshall as Adam and Eve (Photo by Jim Poston of Middleburg, VA) 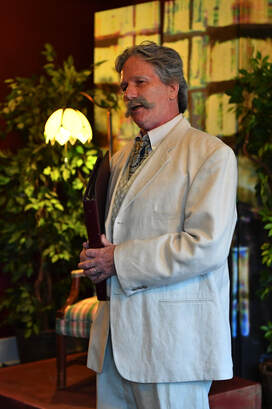 Phil Erickson as Mark Twain
This Romantic Comedy, set in Mark Twain's parlor as well as the Garden of Eden, follows the adventures and misadventures of the first man and the first woman. Based on Twain's novels, in McMath's adaptation has Mark Twain himself set the scenes... and give his personal take on the couple's progress.

Eve's curiosity makes her follow Adam around the Garden until he gives in and speaks to her. But it's not a happy start. As Eve is trying to befriend every animal, Adam is trying to name them. Eve is full of wonder at everything she meets - like the Brontosaurus she'd like to make a household pet. Adam's response? He wants to give the house to the animal and vacate the premises.

Eventually Eve's curiosity also leads her to befriend a serpent, or, as Twain calls him, "The world's first consultant," and that leads to mankind's fall and their exodus from the once beautiful, peaceful garden.  But - as in life - their story doesn't end there. Eventually the couple reconcile to their new world and find that, in the end, love conquers all... and they have other gardens to build.

The play premiered in 2017 at North Gate Vineyard in Purcellville, VA,

FIRST PRIZE-WINNER: A contemporary drama written by McMath, CASE 22 explores a young woman’s sense of herself after experiencing sexual abuse - the guilt, the difficulty she has bringing those feelings up from the past - so certain for so long of her part in it all. But guilt has distorted her perspective and the truth will change everything.

STICKS & STONES took first prize in the 2003 Source Theatre's Ten-Minute Play Competition in Washington, D.C. and has also been produced at the University of North Carolina, 2003, directed by Nate Juraschek. 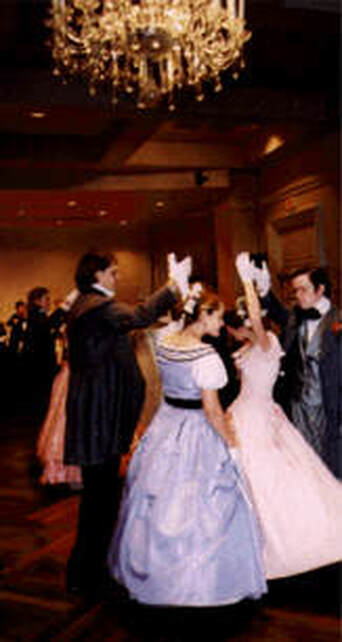 This interactive play recreates an 1855 abolitionist fundraiser as it tells the story of the Underground Railroad. The show includes 19th century dance, parlor games, song, and an auction aimed to raise monies and conscience for the abolitionist cause. The audience be encouraged to participate in all aspects of the festivities. The Abolitionist Fundraiser includes period dance and dance music, Spirituals, and the the “auctioning” of a quilt provided by “industrious members of the Ipswich Female Anti-Slavery Society".

The Smithsonian Institution’s National Museum of American History commissioned McMath to write the work, and it was presented as “An Afternoon with the Caldwells, 1855: the Abollitionist Fundraiser” in the Hall of Musical Instruments as part of a day-long celebration of the “Within These Walls” exhibit.