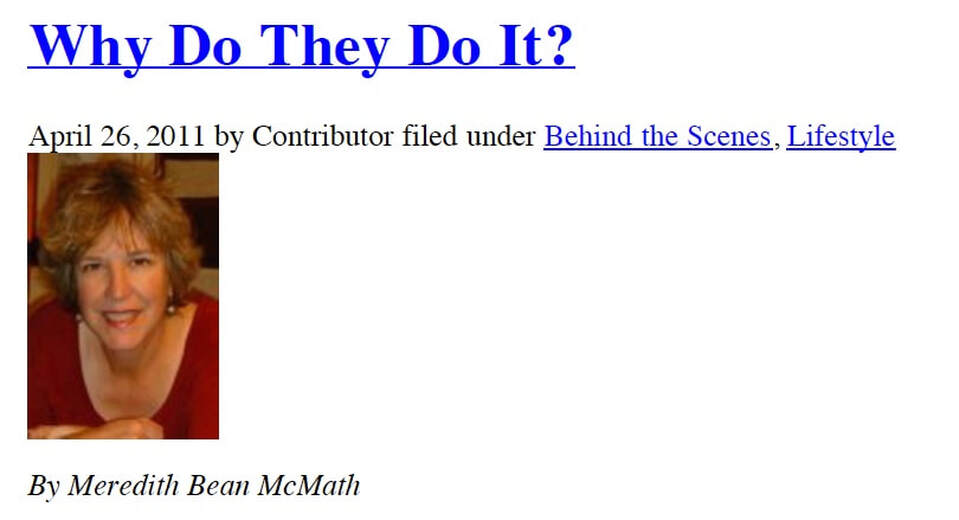 What would it take to get you on the stage? A million bucks? For most of us that’s would be a yes. And maybe not even then…. But for many others, all it takes is an invitation.

Why? What makes a performer tick? Why would someone put in hundreds of rehearsal hours and risk public humiliation just for the chance to stand up there and give us their all? Here in Loudoun we have around a dozen theatre companies, several ballet, dance, theatre and music studios, chorale groups, music groups and bands, an opera company, a ballet company, and a symphony orchestra; clearly this is a great place to ask the question. And so I did.

I put it out there on Facebook, and the answers came in a rush. Three themes quickly floated to the top: performers perform for the sake of personal challenge, the chance to explore new worlds, and a strong desire to share something amazing with an audience.

Actors, musicians, singers and dancers invest hundreds and thousands of hours studying their craft, let alone rehearsing. The average theatre performance requires 20 to 25 two to three hour rehearsals and involves memorization of both lines and “blocking” (your movement during a scene). Area playwright, director and actor Bob Rosenberg has performed with a number of theatre companies over the years and believes the process keeps him “young(er)… If I can remember all those lines and blocking, that’s a good sign! Besides,” he adds, “I’ve met a lot of great people and it’s a wonderful learning experience.”

Most performers have a high degree of respect for creativity and work to hold on to the joy and wonder of the creative process. Loudoun Lyric Opera co-Founder and President Pamela Butler said, “As a young person, the arts gave me a creative outlet for all my pent-up emotions and frustrations and kept me out of trouble! Now I’m just plain addicted.”

Actor Jennifer Richey put it this way: “Reaching adulthood does not mean that we’ve finished learning and growing, and what better place to do that on than a stage?” While some avoid the stage for fear of…well, fear, others embrace that challenge because of the risk. “I can risk and take flight, and if that is a little bit crazy, then a little crazy is what I was born to be,” says local actor Antoinette Arsic. In other words, it’s a chance to “let my hair down,” as Stephanie Karas Moore put it.

Working in the performing arts in Loudoun over the years, I’ve come to know many in the arts – including myself – who, when they recognize something as terrifying,
will walk straight to it and through it, knowing that taking a risk is the only way to discover their true potential. Mark Twain put it beautifully: “Twenty years from now
you will be more disappointed by the things that you didn’t do than by the ones you did do. So throw off the bowlines. Sail away from the safe harbor. Catch the trade winds in your sails. Explore. Dream. Discover.”

EXPLORING BRAVE NEW WORLDS
“I love acting, because I can explore all sorts of different people and time periods,” said Loudoun Valley High School student, actor and stage manager Rebecca Redmon. That joy is as true for the high school student as it is a the professional. Actor Millie Juraschek Shipe, who grew up in Loudoun and counts “Disney Princess” among her many credits, says it’s an opportunity to celebrate and explore humanity. After all, the fun is being able to be a princess one day and a wicked witch the next!

Actor and musician Aislin Kavaldjian of the well-known music group, The Polka Dots, explains, “I’m not an angry person, but I have a tendency to go for bitter or wrathful characters.” Many actors have said the more evil the character, the more complex, and that’s why they enjoy a walk on the dark side. And in the end, actor Robin McClain Kalriess, says, “It makes you appreciate who you really are.”

THE GENEROSITY OF PERFORMANCE
Anyone who’s been on stage knows they create a relationship with every audience. That’s what makes the ephemeral nature of live performance so dynamic. That night, that moment will never come again. I’ve seen it happen: a performance so, so brilliant, that the audience erupts in thunderous applause. Years ago, Music Director, Voice Instructor and actor Diane El-Shafey was performing the role of Mrs. Van Daan in The Growing Stage production of The Diary of Ann Frank, and Mrs. Van Daan was telling her husband that, although they had lost everything to the Nazis, she would keep her fur piece - not as a symbol of wealth but as a reminder of the humanity that once existed there. Her portayal was so profound, that, when her monologue was done, the audience interrupted the scene with applause. Being a professional, she stayed in character but how, I’ll never know.

That feeling of being one with a story is a truly amazing experience for the performer. Sean Pflueger, an actor and opera singer who has performed with the National Opera, says that for him, “Listening to great music makes me want to be a part of it and singing is the talent I’ve cultivated so I can commune with great artists, my fellow actors and the composers whose works continue on without them…. I love telling a story. I love telling that story through a song that communicates a message. Whether the message is to laugh and enjoy yourself or empathize with a character you didn’t know an hour ago, a good show can be a great thing.”

It takes years to be good enough to perform with the National Opera, yet our area organizations provide a plethora of opportunities for young people to enter at the
beginner level and move up. Improvisation troupes, voice, music, acting, singing and dance training, and theatre groups that enjoy gathering families on stage — there
really is something for everyone here in Loudoun. And many companies such as The Loudoun Ballet, Loudoun Lyric Opera and others hire professionals alongside
community members, so the experience becomes even richer for participants, not to mention audiences.

So when does an acting proclivity turn into a profession? Mike Goldstein doesn’t know when it first struck him: “I always wanted to sing/act/perform.” He was involved in
school productions, then community theatre and film work, and now he’s at the University of Virginia looking toward a professional career in theatre. All he knows is
that: “at a certain point, I didn’t want to do anything else.”

Jack Seeley, a professional actor who works with community theatres in the area at times gave a similar answer: Jack performs, he says, “Because I have to.” But even if you don’t pursue performing arts professionally, everyone in the arts will tell you performance is good for you – for confidence, for friendship, for the sake of exploration and for the challenge itself. So what’s keeping you, now?

LINES AND STAGES AND FEAR - OH, MY!
For those of you who still think, “stage fright,” when contemplating the performing arts, there’s good news: every performer is taught a bag of tricks to keep those butterflies caged (caged, mind you, not vanquished). One big trick? No matter what happens – the set falls down, your skirt sinks to your knees, your sword blade side swipes a table (I’ve seen all this and more), trust your training, stay in character, and you can’t go wrong.

Singers, dancers, actors and musicians know perfectly well if they can make the audience believe it was intentional, it will be taken as such. And when larger, unavoidable bumps in the road occur? Well, at the least you’ll have a great story to tell for years to come.

I’ll leave you with a case in point:

My favorite stage blooper was told to me by a young actor who came into rehearsal one night with a story to tell about his father, who was co-starring in a regional production of Steinbeck’s Of Mice and Men. It had happened just the night before. The finale had arrived, and his father, who was portraying the hapless Lenny, was on his knees, his back to his friend George. George was trying to make a terrible decision, whether to shoot his friend Lenny as a mercy killing or let a murderous mob tear him apart. The hounds are baying, the mob is approaching, and finally George raises his gun to Lenny’s head.

Lenny turns and says to him, “Wha... what you doin’ with that gun, George?” The stage then goes black, and the gun goes off. End of play.


Meredith Bean McMath holds a Master of Science in Arts Administration and is the Editor of [the former] LoudounPerformingArts.com – a one-stop-shop for patrons, performers and producers in Loudoun County. She is also Managing Director of Run Rabbit Run Productions (RRRtheatre.org), currently producing the [2011] Run Rabbit Run Dinner Theatre production of “The Importance of Being Earnest” at Grandale Farm Restaurant April 29 – May 15. Contact her at RRRtheatre@gmail.com or find her on Facebook at Run Rabbit Run Theatre.
Hi there!