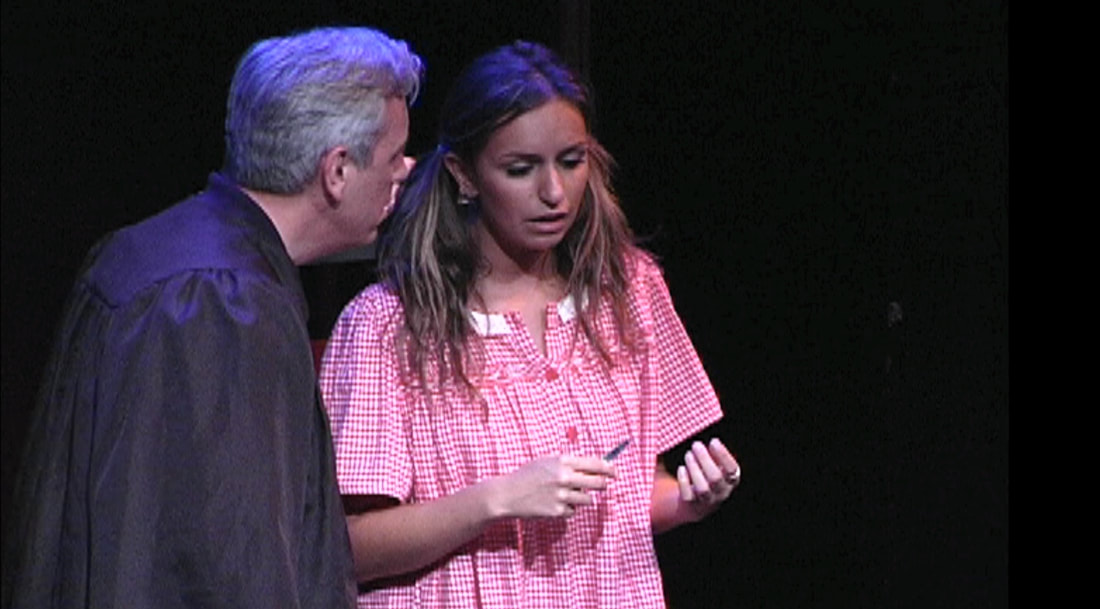 With Kevin Daly as "Judge" and Morgan El-Shafey as "Girl"
"In a pivotal scene in the second half of Case 22, a judge tasked with assessing a case of alleged child abuse engages in careful deliberation, reaches a verdict, assembles the courtroom, raises his gavel and – sorry, scratch that....."

"Actually, after exhibiting zero signs of deliberative exertion, the judge raises a hammer and proceeds to wield it with the veritable absence of subtlety that its actual function implies. It’s a wickedly clever flourish that speaks to the pitch-black comedic sensibility of Case 22, a play that seamlessly operates on multiple levels of meaning and structure even as its central theme, the decidedly unfunny subject of child abuse, remains undiminished by the attendant shenanigans.
"Are they performing or is it the real thing? Case 22 delights in the disarray of its dual plot lines, which serve to emphasize the concurrence of the actors’ predicament with the travails of their script’s protagonist... "In this context, Case 22, which packs a wallop of an ending, adroitly portrays the grim theatricality of a government agency that, despite its grave responsibilities, persists in the apparent absence of a director."- Tzvi Kahn for DC THEATRE SCENE - READ THE FULL REVIEW
This original contemporary drama, written and directed by McMath, premiered at the 2010 Capital Fringe Festival in Washington, D.C. to critical acclaim. The play begins as a group of actors rehearse a play about child abuse and Social Services intervention. But the actors begin to do more than act, and the child begins to do more than the others to get the part... in fact, she may give it her all.

SET:
Center: Black Box with Podium
To side: Desk

For PERFORMANCE RIGHTS, contact Meredith Bean McMath via Run Rabbit Run Productions at RRRtheatre@gmail.com or by calling McMath at 571-209-7386.